Review: THE PROBLEM WITH CRAZY by Lauren McKellar 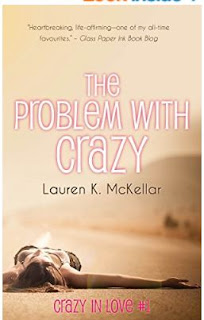 “The problem with crazy is just  that—crazy. It can be good crazy or bad crazy or crazy crazy.”

Kate just graduated high school and is about to go on tour with her boyfriend and his band—away from her parents and this sleepy town. What should’ve been a memorable day and a promising start to a future ended up being an embarrassment when her estranged father shows up drunk at the ceremony. She is angered and humiliated…until she learns that her dad is sick with a disease that will take away his speech, his behavior, and his mind. He will die from it, and she learns that it might be hereditary.

Things are crumbling all around her. She might lose her mind and she might die, so what’s the point? Then she meets this dude outside her couselor’s office with optimistic views on life. He lives by trying everything once. No regrets. If it hurts or gets hard, it’ll be worth it. He’s all about living in the present. And, yes, that’s an annoying belief, but he has a point.

Writing was okay and the story seemed interesting at first, but my pain problem was that it was too slow and had too many useless parts. The girl is just worried about going crazy and she does, I think. Yes, you feel for the character in the sense that you, along with her, hope that she doesn't get the disease, but she drives herself nuts over it, so much to the point that it consumes her. Point is that crazy is the main theme here. Crazy!