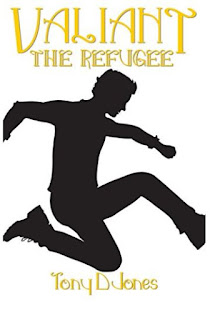 A lightning strike. A boy that survived it.

"Val awoke with a screaming headache, feeling disoriented and weak." (4) With no memory of what happened, he staggers through an unknown place, completely lost and confused. I mean, where else are you going to see unicorns? Then he meets Chimael and Galia, who have been kind enough to take him in. But why have they never heard of New York? After, everyone on Earth knows about New York. How the heck did he end up in Bhon? What was Bhon? Where was Bhon?

But Val wasn't so worried about getting back home, because he really had no home to go to since he grew up a foster child. So when Chimael welcomes him so adoringly and tells him that he can actually and be part of the family, Val was so touched. It doesn't even matter that they might not be human.

Pretty soon, Val settles into his new home life with Chimael. It was there that his new abilities emerge and a startling truth is revealed: Val wasn't human. And, apparently, his species were illegal. Great.

Story was simple and interesting, although I thought it was a tad complicated at times. The whole thing with Ta'ans and Sapiens was a little overwhelming. From that point on, it gets kind of cluttered with too many characters and a vague plot. I liked the idea of a lost boy coming into his superpowers and soon learns to defend himself, which comes in handy in an intergalactic war; but it just sort've petered off for me.

My rating: 3 stars
Posted by Sandra's Book Reviews at 7:58 AM