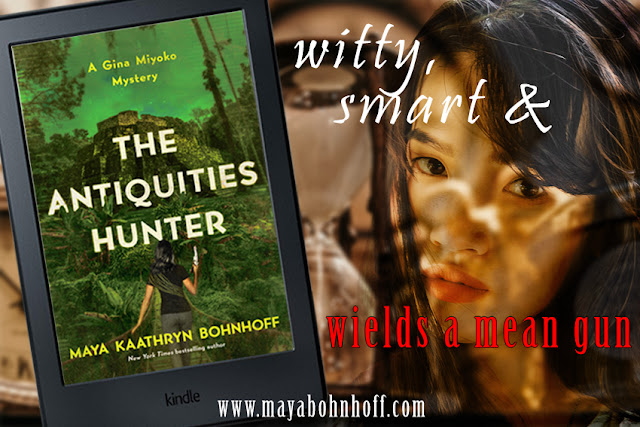 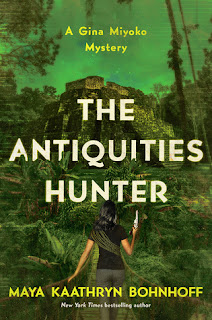 Gina “Tinkerbell” Miyoko is not your typical private eye. Armed with a baby blue Magnum, a Harley blessed with Holy Water by her dramatically disposed mother, and a Japanese mingei tucked in her pocket (a good luck charm from her Sherlock Holmes-obsessed father) Tink spends her time sniffing out delinquent dads in the San Francisco Bay area and honing her detective skills.
But when her best friend Rose, an undercover agent, discovers there’s a stalker on her tail, she hires Tink as a bodyguard. Someone must be trying to intimidate Rose and scare her out of testifying in an upcoming case on looted Anasazi artifacts.  But when Tink tries to flush-out the stalker, things take a far more dangerous turn.

Now, with a dead black-market dealer and an injured Rose on her hands, Tink must take her best friend’s place and follow the looters’ trail towards a powerful and lucrative antiquities collector in Cancun, Mexico. Equipped with an ingenious disguise and a teasingly coy persona to match, Tink is determined to find out who is behind the attack on Rose and the illegal trafficking of these priceless artifacts. Along the way, she will find help in the most unlikely of partners…

Deep in the jungle and far from civilization, Tink must decide who she can trust as she tries to unearth the ones responsible behind the pilfering and bloodshed―and still make it out alive.


When you are alone in the dark, hurting and frightened—no,
terrified—that the next sound you hear will be the dying
scream of a friend, or a round being chambered, you find
things to do.

I had a little pack of Kleenex, my compass, my camera, and a hair clip.
That was on the practical side. On the arcane side, I had a jumble of good
luck charms: a Hopi tinu, an obereg, and a piece of wire from an old Cadillac’s
taillight. And then, firmly in a class of its own—Things That Were
Once Practical But Are Now Junk—was the cell phone that wasn’t much
of a cell phone this deep underground.

I turned it on and was immediately mesmerized by the pale luminescence
of the little screen. I hoped there was enough kick left in its battery to light
my tiny world for a while. I used the wan light to check my bandages. They
were fairly dry. I had stopped bleeding.

I shut off the cell phone-cum-flashlight and mentally checked the rest
of my personal inventory. Earrings, a fake engagement ring, a watch, my
Saint Boris medallion. I had a small custom tattoo on my right hip. Or at
least I had before tonight. For all I knew, the bullet that had grazed my hip
had cut a bypass through that neighborhood.

I prayed not. I was a bit superstitious about that tattoo. It was a Russian
Orthodox “Old Believer” cross with a Buddha seated in an eight-petaled
lotus in the heart of the second crossbar and surrounded by beams of light.
I’d gotten it the year I obtained my private investigator’s license. Other
than the tattoo artist who put it there, my best friend Rose and I are the
only two people in the world who know that tattoo exists. No one else has
ever seen it. Not even my mom. It’s probably the only secret I’ve ever been
able to keep from her.

My reeling mind wandered to places more pleasant than the pitch-black
guts of the Mayan temple, in which I was trapped like a wounded animal,
aware that tons of rock pressed down on my hiding place, and that a man I
had once liked and trusted pursued me with one aim—killing me.

How had I come to be here, you might wonder? Hell, I wondered myself.
One day I’m chasing down delinquent dads in San Francisco, the next I’m
trying to avoid becoming part of a South American archaeological site. All
Cruz Veras’s fault.

A jolt of raw terror shot from one end of my body to the other; I was
falling asleep.

Okay, so the Wicked Witch of the West had routed me through her
infernal poppy fields. I’d think of snow.

I pulled myself up off the stone stairs I’d been huddled on, wobbly and
dizzy. My hip whinged. I took deep breaths and held them for three seconds,
then let them out . . . quietly.

I was in my fifth rep when I heard something that woke me utterly: a
gunshot.

I pressed myself to the wall and moved down the stairs one shallow tread
at a time, pausing to listen. Sounds found my ears—movement, shoes on
stone. In the maze of tunnels under Itzamnaaj Balam, I couldn’t tell where
it came from. All I could do was continue to move, descending slowly to
even lower levels. I paused, put my head against the cool stone, and listened.
Sounds rose up from below, sounds that might have been the scurrying of
mice anywhere else. But there were no mice down here.

My eyes were starved for light, yet dreaded to see it. It would be him,
searching for me.

I fell into a sort of stupor, shuffling through the shadow lands, listening
and watching. So when my eyes finally saw light, it didn’t immediately
register with my brain that it meant Something Bad. I found myself being
drawn toward a strange, gray, faded spot on the left-hand wall of the corridor
ahead. I was nearly on top of it when I realized that it was reflected
light from a cross-passage to my right.

I flattened myself to the near wall and peered around the corner.

Ambient light washed out of everywhere and nowhere to illuminate the
narrow way. I could see clear through to its other end, where there was a
wall as solid and opaque as the one behind me.

Where was the light coming from? Curiouser and curiouser.

I stepped cautiously out into the junction. And was turned to stone. He
seemed to emerge from the very wall of the maze not four yards distant, his
flashlight in one hand, his revolver in the other.

He swung slowly toward me, bringing the muzzle of his gun to bear. I
stood and clutched my useless cell phone and waited for him to shoot me.

“Hello, Gina,” he said, sounding like Eeyore—relieved to have found
me, but depressed as hell. “You don’t look so good.”