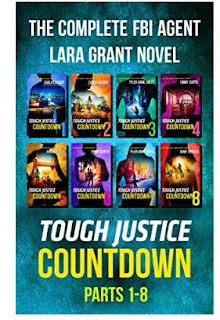 Agent Lara Grant refuses to let her past get in the way of her duties as an FBI agent. Yes, she’s still haunted by the memories of discovering her mother’s murdered body and having to give up an illegitimate child, but the citizens of NY need her services, and the time is now. A string of bombs is terrorizing the city, and she must find the bomber, known as “The Whisperer,” before he strikes again.


This is a collection of episodes that each read like short novellas, but, combined, they comprise into one full-length novel. Each part is a continuation of the series, picking up where the last one left off. Although each part could be read as a stand-alone, episodes 1-7 really don’t have endings; they finish off with a “To Be Continued.” In other words, you have to get the whole series to find out how this ends. You can’t get one part as you won’t get the whole story. However, once you get a taste of it, you’ll want to devour it all.


The hunt was compelling all the way and hooks the reader until the end. Gripping and Enticing!

My rating: 4 stars
Posted by Sandra's Book Reviews at 7:35 AM