Review: HOLLOW TOWN: THE DARK SIDE OF THE CITY by R.A. Marc 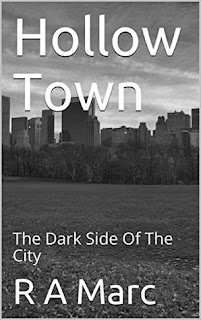 "Children went missing all the time, it happens here in America and in every single other country in the world...Most of the many thousands that happen every year, no one ever even hears about...It's only those few ones the press get a hold of and enter the national consciousness." (3)


Janet Wingers seemed to have been one of the many that went missing, even though it's almost unheard of for such a thing to happen in Central London. And how could she have disappeared from an enclosed dressing room at the mall?


Described as a "thriller suspense set in London," Hollow Town follows the investigation of a little girl's disappearance. Harry, a lead detective the parents hire for the case, believed this to be a crime of trafficking by a Saudi Arabian cartel. Then the story takes an alternate route, revealing how a wealthy Middle Eastern man named Ahmed was kidnapping these girls to support his lavish lifestyle.


Short, quick, and simple, story was pretty straightforward, although I kind of felt that it was a little too scattered. It didn't really have a natural flow. I mean, one minute, we are reading about the so-called versatile Patricia, who works for the detective agency that suspects the Middle Easterners, and the next minute, we read about a woman's abusive relationship with the Middle Eastern man, who confessed to all these kidnappings. And this was all in the first chapter. I mean, I honestly thought that Patricia was going to be the lead detective by how it started, but it turns out that a couple of gangsters were on the case. And why was there even a case when Ahmed practically revealed his whole operation to this ex-girlfriend, who confessed everything to the police? Perhaps the "thrill" was in catching this guy and his villainous cohorts. It just felt all over the place. There really wasn't much direction or real "thrill" in it. There was also a few typos in it, which I managed to overlook for the most part.


The writing was okay, and I liked the concept and all, but no way would I have called this a "thriller."

My rating: 3 stars
Posted by Sandra's Book Reviews at 7:08 AM