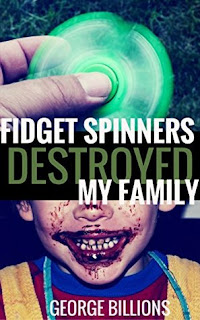 The story began with the mayhem and aftermath caused by the fidget spinner. I mean, lost children and fire. I mean, MY GOD! How, in the world, did this start?


It all started at Christmas, when everyone in the family received the hot new toy on the market―the fidget spinner.  What started off as innocent obsession soon spells disaster.


Short, simple, and direct, the story is a witty and catastrophic account of one, little toy. Really, the root cause of all the disasters was sheer speculation. Fiddling with a spinner could obviously be mistaken for a utility knife or jacking off. Of course, for me, the interesting part was NOT the stupid spinner that's been all the rage, for some godforsaken reason, but it was the pure domino effect of disasters that ensued with drug addiction, violence, affairs, and whatnots.  And it all started out of nothing and mounted into unbelievable proportions. I'm not sure you can really say that the spinners were the cause of all this. I think it was this crazy family's paranoia.


This was just a kooky story, a classic tale of coincidental misfortune. Man, what a wicked and creepy cover!