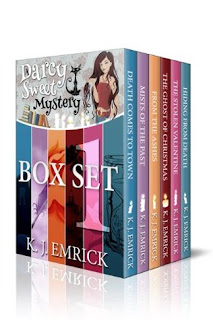 Mists of the Past (Book 2)
Darcy Sweet, psychic bookstore owner and mystery lover, is back!

Now, she’s dating the police detective (how cliché) and something from his past is haunting him. Well, not literally, but there was this unsolved case that prompted his move to Darcy’s town. Now, he’s getting threatening letters and he thinks the killer is in town, so the couple must work together to solve this old case.

Basically, the story involved talking to old ghosts of the past. It was slow and centered mostly on the lovey dovey couple, which was very distracting. Very anticlimactic in the end.

From the Ashes (Book 3)
Darcy is helping a young girl, who is haunted by her mother’s death. Again, not literally, but the mother supposedly died in a house fire and the daughter just wants closure. What could she have seen that day that spooked her? What really happened to the mother? Could she actually still be alive?

This one starts a lot quicker than Book 2. I enjoyed the mystery concerning the mother’s death and the fire.

The Ghost of Christmas (Book 4)
An angry ghost comes knocking on Darcy’s door, seeking justice for his murder. Apparently he was murdered on Christmas 20 years ago. And things between her and Jon are bumpy, which was good! I thought the couple was too perfect, which is dull.

Could the guy have been killed by the Santa suit? Was the suit haunted? Mmmm. This was an interesting angle, if only you didn’t have all the Christmas crap.

The Stolen Valentine (Book 5)
The Season of Love – Blah!

Too much V-Day. Again, this had a slow start. It doesn’t get interesting until Chapter 5 with the missing brother-in-law, but the mystery was just too dull to keep up.

Hiding from Death (Book 6)
Another slow one. It just seems that each book after the first just kept getting less and less supernatural. I mean, Darcy’s a psychic for godsakes!

Overall, these mysteries were not that great and did not compare to the first book, which was one I really loved.

Overall rating: 2 stars
Posted by Sandra's Book Reviews at 8:03 AM