Review: MY DADDY, THE SERIAL KILLER by Cindy Kovacik 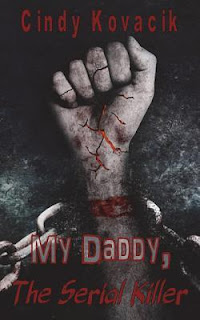 Katelyn was six years old the first time she saw a woman chained in the cellar. She will never forget the pain in her face and she could never figure out why her father would do such a thing. It’s at that point that she decides her father is “mean,” and aims to get out of that house.

As years go by, Katelyn becomes more withdrawn, which subjects her to the relentless teasing of the other kids. That just angers her. After biting the boy she hated, Katelyn soon realized that her father might not be so bad after all, especially when she didn’t get punished for it.

As more time goes by, the girl sees more grisly things. She doesn’t know what’s going on or why, but she knows that she’s afraid. She knows that the man she’s living with is not her daddy anymore.

Just like the title says, this is the story of a sadistic and twisted father told from a little girl’s point of view. The whole thing is basically a compilation of memories—fragments of what she witnessed in that house and how she felt. It was like a frightened girl’s diary. Storyline was simple and the writing was good, but I thought the pace lagged a little too much. All I kept on hearing about were the sick and twisted things the father did; how the girl would try to stay out of his way; and that she would vow to leave someday. I just thought that was a little daunting and redundant. What I liked best is that we don’t get into gory, bloody details. I think that stories can say a lot without revealing too much.

Overall, I thought this was nothing but the inane ramblings of a psychologically damaged child. Well, of course, who wouldn’t be damaged with a serial killer daddy?

My rating: 3 stars
Posted by Sandra's Book Reviews at 7:55 AM