Review: ROMANCE IS FOR OTHER PEOPLE by Lee Wolf 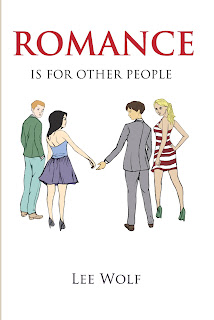 Chris and Lydia are just friends, but Lydia has been in love with Chris for years. When he finally agrees to take her to a high school dance, Lydia figures that this could be her shot of showing him how she really feels. But her BFF role was clinched with Chris' impromptu remark: "Romance is for other people." Ouch!


Written in he said/she said fashion, story seems to reflect the rocky bumps of high school relationships. Rather than being a conventional ride of ups and downs, however, story actually coasted bleakly across a dry, underdeveloped plot.  All I kept on hearing was each of them whining about the "status" and the "meaning." This is SO high school.


Things shake up a bit when the awkward twosome turns into a complicated foursome. It seems some other guy might be trying to get back at his ex-girlfriend by flirting with Lydia and Chris doesn't like it, but then the ex-girlfriend might have an ulterior motive too. It was just a mess. And then going back and forth between the Chris and Lydia POV didn't help much, and then, to top it off, we go back in time.


Not only did the story lack clarity and consistency, but it also had some typos. Now, normally I can bypass typos if the story is captivating enough, but, in this book, there were a few that didn't make sense. For example, "and before I even thought about it, I put my arm around my shoulder. I could feel him stiffen...I finally took my arm off his shoulder and gave a disappointed look." I think this was supposed to be "I put my around his shoulder."  I mean, how can you put your arm around your own shoulder?


I thought this story would be a fitting read of candy crushes and puppy love and, to a point, it is; but it just didn't suit me.