Review: MELT WITH YOU by Jessie Evans 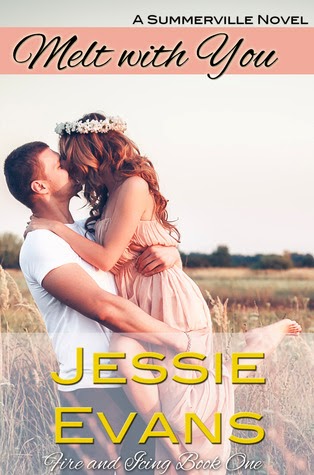 How come Methodists are allowed to hold a charity event like “Hunk for a Month”? I thought they were supposed to be holy or something? Still….not a bad idea.


For Naomi Whitehouse, there was just one thing she had on her mind: to bid on Jake, the smokin’ fire fighter and first love of her life. But ever since Naomi broke Jake’s heart back in high school, he’s been an unforgiving patch of ice. And can you blame him? I mean, who’d want a woman that “ran off to sleep her way through half the world’s male population”? My goodness!


Of course, all that hanky-panky didn’t pay off in the end. And even though we’re supposed to feel some pity for Naomi, I honestly could see why Jake could never forgive her. She treated him horribly when she left. And, to top it off, she was “used goods” now.


On the other hand, who could blame her for trying to pursue Jake? He was a sweet and tender HOTTIE! Seriously, what was wrong with Naomi? How could she let him go? Admittedly, I enjoyed the cold attitude Jake gave her in the beginning. She deserved it, and, quite frankly, I don’t think that she deserved Jake. In fact, she was a caliente vieja. I liked his first wife better; she seemed nice.


I mean, I, too, would do anything to get Jake—the beautiful, kind, and burly Jake. “You’re more than your body; you’re a person, a damn good person who deserves a man who will see that without needing to have his face rearranged.” (120)  Other than the smoldering Jake, Faith, his surrogate sister, was my favorite character with her “happy, simple, single-and-loving-it world.” (154) I’m kind of curious what’s to become of Faith and Mick in the next book of this series (yet another to add on my TBR list.)


The story was well-written and well-paced. It may have been a little too lascivious for my taste, but it was still a light, enjoyable read.

Posted by Sandra's Book Reviews at 8:01 AM