Review: HOW TO HOOK A HOTTIE by Tina Ferraro 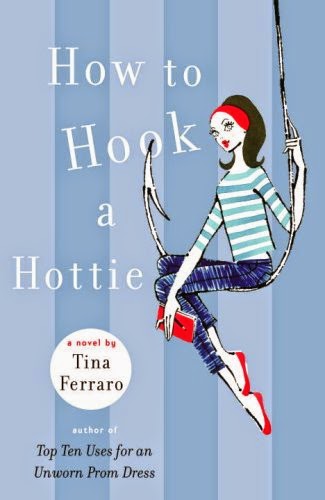 At 17, Kate Delvecchio has one goal in life: to become a millionaire before the age of 20. And as far as she’s concerned, college will only slow her down. Unfortunately for Kate, the one thing her parents do agree on is that they totally disagree with her strategy. And so the deal is born. If Kate can raise five thousand big ones by graduation day, her parents will hand over the balance of her college account to invest as she pleases. No college, no degree, and no way she’ll ever be able to pull it off. But when Kate accidentally agrees to go to the sports banquet with the hottest guy at school, she stumbles upon a possible cash cow. The rest of the junior class is amazed that no-nonsense Kate could hook such a hottie, and one by one they approach her for help hooking their own. She doesn’t know anything about getting guys, but for $100 a pop, she’s more than willing to invent a six-step plan for How to Hook a Hottie. And how could that possibly backfire?


My thoughts: Kate is a funny and ambitious character, presenting herself with a self-deprecating quirkiness and a fierce drive. Also known as “Complikate,” she absolutely will not allow anyone to stand in the way of her dreams.

“Being popular and running with the ‘cool kids’ just didn’t get my motor running. Which either made me wise beyond my years or just plain weird.” (22)


A plain brain with limited social skills (like me,) Kate has a goal: to be a millionaire by the age of 20. Ooookay. Yeah, that’s not too unrealistic.


Suddenly, an epiphany: getting paid to teach girls how to hook a hottie. Not a bad idea, but I wouldn’t know what to do or say either. Still, Kate was never one to walk away from a challenge, and she did need the money.


In the midst of this grand scheme, Brandon Callister, the most popular hottie, is into Kate, and, out of the blue, she was branded as his “girlfriend.” Was Kate really lucky to have such a narcissistic windbag?


“People thought I was the girlfriend of I guy I could barely stand. And the only thing that had gotten me into this situation was just being myself.” (90)


It was ironic how Kate takes up her own made-up advice at hooking the hottie. She SO liked Dal, but it was too bad he was already taken.


Overall, the characters were okay, but not very memorable. Sometimes Kate can be too money-grubbing and tyrannical. Even though I knew that the “hooking-hottie” biz wouldn’t work out, it was interesting to see Kate grow and learn from her mistakes.


A quick read you can get through in a matter of hours.

Posted by Sandra's Book Reviews at 8:55 AM