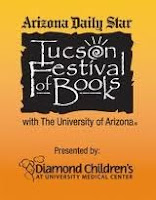 I just got back from a weekend at the Tucson Festival of Books in Arizona (actually, it was really only a Sunday since most of Saturday was spent at the airport trying to get to the festival.)

Many thanks to Nuestras Raices and the Pima Public Library for sponsoring my trip. I had a blast!

I must admit that this was my first out-of-state gig. Actually, it was my first flight ever! I always figured that I would avoid planes all together because I thought I would be a nervous flyer. I was surprised to realize that days before the festival, I was actually looking forward to the trip. But, still, I was a flight virgin--I didn't know a thing about airports. So I started doing my research the day before to figure out the logistics: what to do, where to go, what to bring. I wasn't even sure if I was allowed to bring toothpaste, especially since my sister got the story in my head about the woman who was frisked for the lipstick she wasn't allowed to take through security. Oh, geez, maybe I'm not allowed to bring toothpaste. Or sanitizer. Wait, what constitutes a "carry-on" bag? Was it even the right size for it? Oh, man, what do I do!? I don't want to get stripped search at the airport! Do you know how humiliating that is?

So I thought I would just play it "safe" and limit my packing to just the clothes on my back and about 20 copies of my book.

My flight was scheduled to leave at 12:45pm on Saturday, March 12. The website suggested to get there an hour to an hour and a half before your flight to have ample time to check in for your boarding pass and get through security. Okay, so I thought 11 was good, but nooooooo. My sister suggested I'd leave at 8 o' clock in the morning to beat traffic and the long lines I was bound to run into at security. And what if we got lost? "Okay, we'll leave at 8," I told her after about an hour of debate.

We got there at 9:56am. I didn't have to check in with the air line because I had done that online. All I had to do was go through security, which only took about 10 minutes. Then I waited for about two hours for the flight. Oh, yeah, it was worth getting up at the crack of dawn for this.

When I boarded the plane, I felt a mixture of excitement and uncertainty (most mostly excitement.) I felt like I was on a roller coaster plummeting down when the plane sped through the runway and finally jumped into the air. Okay, I admit it, I was a little concerned about that take-off....and the twisting and turning in the air kind of threw me a little too. But, once I got past that, it was all good, I was good. I may even go as far to say that I had fun riding the plane. I even got a little sleepy. Something about flying in the air just makes you want to close your eyes and snore your head off.

It took an hour and a half to get from California to Arizona. The dry, desert heat fell upon me as I got off in Phoenix. I mean, it just totally hits you right in the face the second you get off the plane. Whoa! Yikes!

After all that, I finally got to Tucson and met up with my volunteer, who drove me to the Hampton Inn that evening. I was so surprised at how nice the room was. I felt like I had gotten the presidential suite or something. I acted like such a kid, jumping around on the bed, kicking and shouting, "Whoo-hoo!"

I got a head start the next morning at 6am with the complimentary breakfast at the hotel. At 9:30am, my volunteer picked me up and took me to the festival. I was speaking on two panels--one at 11:30am and the other at 2:30pm with a book signing in between. So I had absolutely NO time for anything else. I just stopped by the Nuestras Raices tent, got a few mementos, got a little something to eat, and waited in long-ass lines for the bathroom. I ended up leaving my second panel early because I had to catch my plane back home at 4:50pm.

So there was my weekend. I only wish that I would've had the chance to enjoy the festival as a spectator. It would've been better if I had gotten to Tucson Friday night and spent two nights in the hotel. That way I would've explored the festival all day Saturday, meeting authors and buying their books, and done my panels on Sunday. On Saturday, I would've been a fan; and Sunday, I would've been an author. But that didn't happen. Oh, well, I still had a blast, and I hope to return for next year's festival.
Posted by Sandra's Book Reviews at 7:38 AM