Some books make us laugh. Others make us cry.

But there are a few select that actually make us do both. 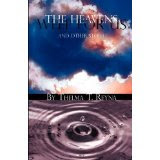 And one of the stories in The Heavens Weep for us by Thelma Reyna did that for me.

In Little Box, an old lady named Petra visits her daughter and son-in-law in Chicago. During her stay, she takes the dog for a walk and discovers a little box along the way. It was a fancy box that just screamed, 'expensive.' Being that she likes collecting hand-me-downs, Petra took the box and hid it in drawer of her daughter's home. Her plan was to take it back home and add it to her vast collection.

But Petra noticed something else during her Chicago visit. Her daughter's marriage may be falling apart. Not wanting to interfere, Petra leaves them to hash it out. Eventually, Petra jumps on a plane back to Arizona when she realizes that she forgot the little box she wanted to bring back with her.

Days later, Petra received news that her daughter was getting a divorce.
"What happened?" she asked.
"There's someone else," her daughter replied.
"What evidence do you have of this?"
Her daughter looked grimly at her and calmly answered, "Because of the little box I found."

The little box Petra hid in her daughter's drawer.

So because of what Petra found, a couple's marriage was now over.

Funny!
Posted by Sandra's Book Reviews at 8:34 AM